There are 15,000 facial-recognition cameras installed in the country right now. Could some clever makeup by Virtue fix the problem? 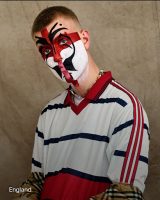 The World Cup in Qatar is a privacy nightmare. Across the eight stadiums, there are 15,000 state of the art facial recognition cameras, allowing security to zoom into any one seat from a central command centre.

And while the state insists this is to keep fans safe from terrorists, hooligans, and – uh – pitch invaders waving plastic rainbow flags, it all sounds a little bit 1984 for Virtue’s innovative creative team.

With that said, our creative minds and their partner Brandhouse have been working on a cutting edge solution: face paint. As well as being a staple at international football tournaments, face paint can also – in theory – be used to evade detection from facial recognition algorithms like the ones used in Qatar.

The first step was to come up with a face paint design capable of confusing Qatar’s facial recognition technology. Good news then, that over the last few years there’s been eye-catching reports of Juggalos avoiding police surveillance thanks to their black and white face paint. Truly, an inspiration to us all.

They then fed images of juggalo makeup into an AI generator and asked the programme to reimagine the makeup on the faces of international football fans all whilst blending these geometric shapes of juggalo face paint with the distinctive designs and symbols of national flags. 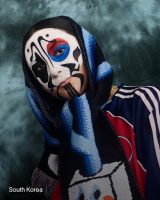 “We gave it these kinds of descriptions and then ran that process a lot of times until we got to a result that couldn’t be recognized as a face when we pass it through like face recognition software. And then we knew we had a little bit of human love afterwards to tidy things up and make sure that [the patterns] are also aesthetically functional because generative AI does start to hallucinate at some point and make some really weird stuff.” The team tested the various Juggalo and flag patterned make-up on different consumer-grade facial recognition tech — the actual facial camera system used in Qatar is unknown to the public — and found many of the designs were able to elude cameras.

Out of the 10 systems that were tested, the team estimates that around 80% of the tests were successful.

Although Camoflags isn’t aware of any adopters of their face paint designs at the World Cup yet — and recommends people don’t risk getting in trouble in Qatar by testing its limits — they think it will help start a conversation about surveillance at sporting events.

Find out more at Virtue.